Tale Waves is brought to listeners by children’s storyteller, Gilly Stewart.  Each episode is introduced by the character ‘Hetty Tale Waves’, who hands over to a different storyteller each week, reading a totally different story.

The series builds on years of successful storytelling by Gilly in libraries, schools and bookshops, founded on child participation, dressing-up, and lots of fun.  As the series progresses, Gilly introduces classical music to the productions – as well as plenty of sound effects (for full credits for all episodes, click here)..

In Episode 1, Hetty introduces a tale of bravery and love, told for us by Morning Star.

“Naughty Neptune” is a tale of selfishness, lack of respect and greed, but then finally, from a realisation that from these human weaknesses, strength, honour, happiness and goodness can shine through.  It is told by the mermaid character, Mesmarina. 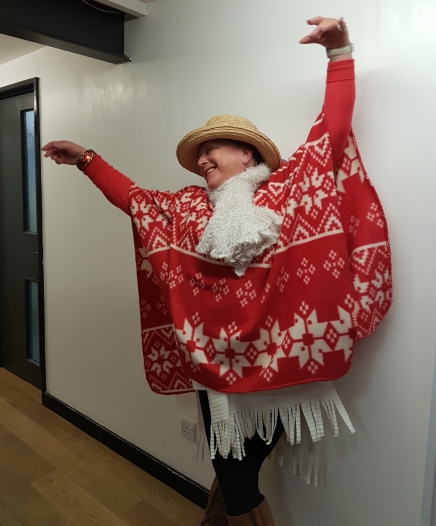 The story of “Scruffety Bear” is told for us by Granny Goldilocks (pictured) and is a tale of sadness, rejection, love and friendship. 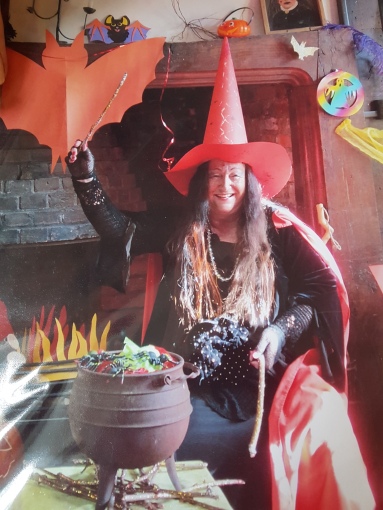 This spooky edition of Tale Waves was released just in time for Halloween, and was told by the character Cacklewitch (pictured).

Set in Africa under the heat of the burning sun, “The Brave Mweni” is a tale of courage, honour, love and finally success, through the strength and goodness of an honest heart.  In the story, a young girl called Mweni journeys to find water for her family and home village, facing dangers along the way.

Episode 06: “The Amazing Journey of Axel Greese, Hammerix and Guron” 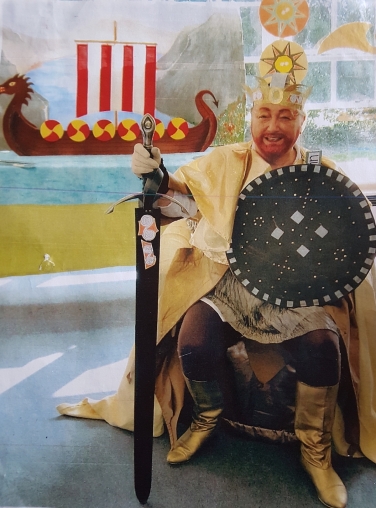 As told by Odin, the great mythical god.  All of Gilly’s Tale Waves stories are complete works of fiction, from inside her creative mind – pictured here dressed as Odin!

A story of friendship, respect, fantasy and finally, the ultimate love between two young people.  It is already a firm favourite among children who have heard the story told by Gilly in one of her workshops at Farnham Library.  Set in China, it is told by a princess.

This tale sees a motley crew of pirate characters set sail on the high seas, searching for treasure.  In the end, we learn that goodness and honesty rises above wickedness and greed.  It also tells of love and friendship, which in the end, is worth fighting, and hoping for. Pictured above is Gilly playing one of the pirates, Revolting Ruth.

In this episode, guest reader ‘Lucy Rockett‘ tells the story of Starbright – the brightest star who has ever been – who learns that beauty isn’t everything. We whizz across the Universe, meeting stars, spotting constellations, and all with the help of a comet called Bernard.

This episode is a story told by a fairy called Frinkle, about a day spent in The Flickering Forest with some of her woodland friends, which changed their lives, and helped them to become kinder and more thoughtful creatures. 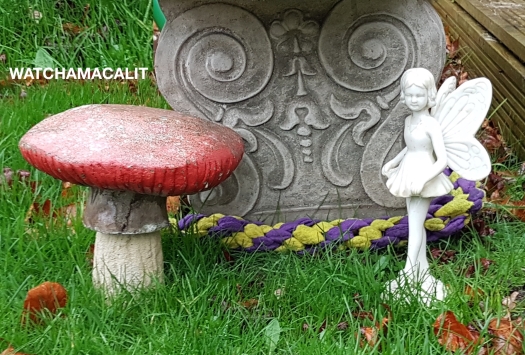 This episode was originally posted in the run-up to Christmas 2017.  It is told by one of Father Christmas’ elves, Twinkle Toes – and as ever, is all the creation of Farnham storyteller, Gilly Stewart. 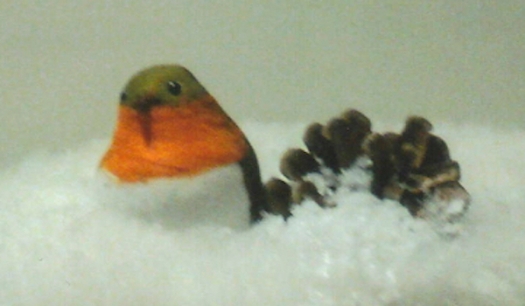 With thanks to Bowleys Fine Shoes, Farnham for use of their window display!

Another pre-Christmas tale from 2017.  The story is told for listeners by Mother Christmas.  As well as the story, there is a poem by Gilly Stewart, especially for this time of year, entitled “Waverley Abbey Winter Thoughts“.

This episode is a story called “The Snow Sprite“.

Especially created to fill the gap between Christmas and New Year, this special story for the holidays was told to our regular host, Hetty Tale Waves, by Rudolph the Red-Nosed Reindeer, and features a trip to the moon in the company of the Snow Sprite.

This episode is the tale of ‘Hank The Plank‘.

Gilly Stewart’s podcast presenting creation, Hetty Tale Waves welcomes Sky McDonald into the studio to share a tale of bravery, fear, hope, and finally friendship for life, based in the Canadian Rocky Mountains with their breathtaking scenery.

In this episode, we feature the story of Custard Duckling, as told to regular podcast presenter Hetty Tale Waves by fictional painter, Branston Bristlebrush. 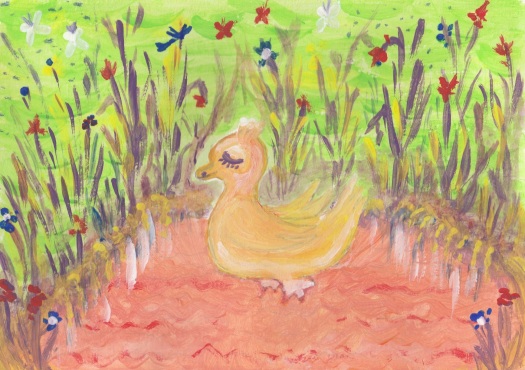 It is the tale of an amazing experience, when what was staring out at the artist from the easel, literally flew out from the page to create a quite magical experience.

This episode is a story called Tree Runners – a wonderful story of fantasy, unknown beings and enchantment, told to regular host Hetty Tale Waves by our guest storyteller, Daisy Serkel.  It is set in a fantasy forest deep within the Sprinklebourne Valley, where you can find the two tallest trees in the world – and many fantastical characters.

This episode is a story called Foo-Fow’s Funky Factory, set in Pom-Pom Land, and featuring Percy, the Sea Serpent. 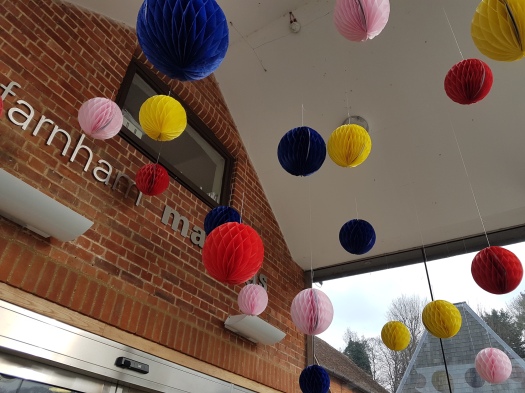 The story is one about hardworking La-Las, a crazy factory, beauty, friendship, love and hope for the redemption of humankind.  Listen out for plenty of graceful swans in this tale.

This is a story featuring a time-travelling King, set in Farnham, Surrey.  It is entitled Meeting Charlie.  It is based on the true story of when King Charles I stayed overnight in Vernon House, in West Street, Farnham, en route to his execution in 1648.  In our story, when brother and sister Stanley and Rose visit Farnham’s library, adjacent to Vernon House, they are taken through a time vortex when they decide to go exploring, and end up meeting King Charles I. 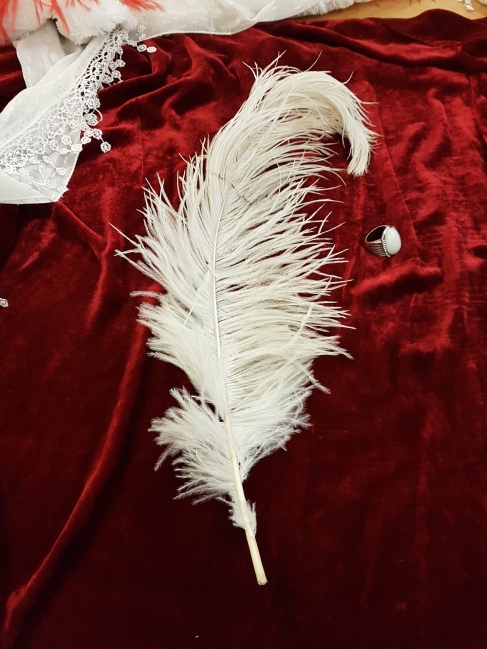 While they introduce him to hip-hop music and they all enjoy a good dance together, the King introduces them to some of his finery – and leaves them with a white feather, and a poem through which they can remember their trip through the centuries.

This is a story called The Icicle Fairy Fountain, full of enchantment, adventure, naughty behaviour, wickedness, happiness, friendship, love, beautiful music, and lots of magical fairies who live on, and in an icicle fountain – but when the icicles melt, they disappear, as if they were never there!

The story is told in the studio by Daphne Crumble – the housekeeper to one of the main characters in the tale, Lily Lavender. 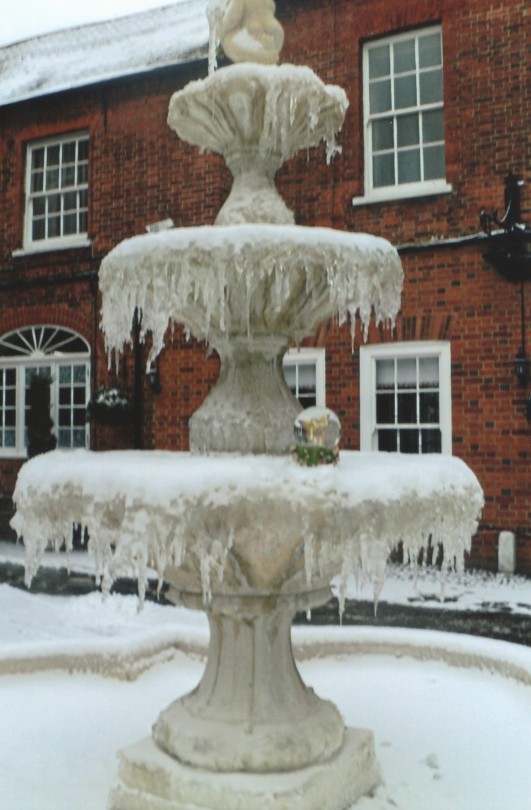 Special thanks to The Bush Hotel, Farnham (Surrey), for their help in providing inspiration for this story.

This is a story entitled “Sky Dancers“, and is told to our regular host Hetty by somebody called Starday Nite, once known as Alexander.

To mark the fact, Hetty has travelled all the way to the fictional, windswept location of Nordland, to capture the tale for her regular listeners – and to see the beautiful Northern Lights, dancing across the sky in all their beauty for herself.

All the names, characters locations, and incidents featured in this and all other stories featured in episodes of Tale Waves are from the imagination of Gilly Stewart, and are completely fictitious.  No identification with actual persons (living or deceased), or places is intended, or should be inferred.

This is a tale about A Doll’s House – plus a little girl called Olivia, and a mouse called Montford.  It is about a birthday, presents, dreams, fantasy, friendship, and kindness.  Look out for that mouse!

This is a tale full of musical, melodious magic.  It features a nightingale called ‘Diva’ who tells of the sad loss, and wonderful reunion with her beautiful daughter, ‘Aria’.  The two of them now sing together all around the world.

The tale in this episode features not only Opticus Owl (below, top left) two teddy bears (Frankie and Captain Weed below, bottom right), Snazzerjack (below, top right) and the wicked Sleezels, the Uggle Guggle (below, bottom left), and Aliberti Albatross, and takes place in the fictional Tinglebourne Valley, where only animals are allowed to live – although it may be inspired by a village not a million miles away from Farnham in Surrey – perhaps you can guess where this magical place is?

This episode is inspired by the Castle Street Flowers stall in Farnham.  It is set in 1810, and is about an orphaned child who is forced to sleep under the flower stall at night.

This final episode in the series is a tale called ‘Junk‘ – inspired by the amount of litter we leave behind us, in the oceans, on the streets, in the rivers – and even in space!  It is told by the author herself, Farnham’s Gilly Stewart.  The story is about selfishness, laziness, greed, wonder, hope and the need to protect and save our beautiful planet Earth – and features a number of the Sky Gods.

Credits for music and sound used in each episode can be found by clicking here.